What You Need to Know About the Emerald Ash Borer 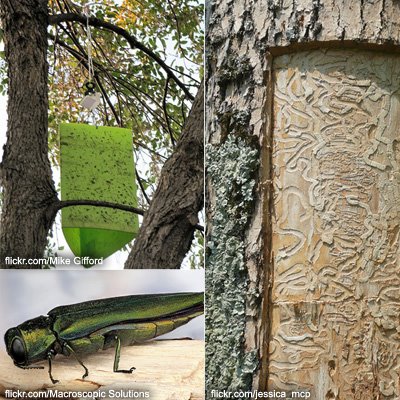 Live any other living thing; trees are susceptible to diseases, parasites, and invasive species that threaten their existence. If you depend upon wood products, such as heat treated pallets, for the livelihood of your business, you’ll want to learn more about the recent infestation of the emerald ash borer and its potentially devastating consequences on ash trees in Canada and the United States. Read on for the full report.

Where it Came From, Where it Is, Where It’s Going

From an entomology point of view, the emerald ash borer is actually a beautiful creature. It’s about two centimeters long, shiny green, and the type of bug that would make even the most casual observer of nature to stop and look. However, it’s highly destructive, killing ash trees by impeding their ability to circulate sap.

Not a native species to any part of North America, the emerald ash borer came over from eastern Asia, probably as larvae in wood packing material. Experts speculate that it first appeared in southeast Michigan in the late 1990s.

Once the larvae got out, problems cropped up pretty quickly. By 2002, it had become a problem in Michigan, and in the next few years, the infestation had spread to neighboring states plus Ontario and Quebec. More recently, it’s spread farther south toward Arkansas, Missouri, and Louisiana. As it spread, it killed millions of trees in its path — and it’s showing no sign of stopping. In fact, in Montreal alone, it’s estimated that the emerald ash borer will claim 3000 trees this year.

In an effort to curb the emerald ash borer infestation and keep as many trees alive as possible, organizations like Natural Resources Canada and individual municipalities have been trying out a few different techniques. Traps that transmit a deadly fungus to the insects have been somewhat effective, as have a spray that deters the pests.

Some areas infested with the emerald ash borer have also experimented with introducing Chinese wasps to eradicate the invasive species. These non-stinging wasps can kill emerald ash borers (and other bugs) by laying eggs inside of them. When the eggs hatch, the larvae eat the borer alive. There is some skepticism about this method, as there’s no assurance that the Chinese wasps won’t cause their own issues.

Finally, an injected tree vaccine has shown promising results in warding off the emerald ash borer. Once the vaccine circulates throughout the tree, it kills the larvae of the borer as well as other tree pests.

No Worries With HWP Herwood Pallets!

As the North East’s wooden pallet and crate supplier, HWP Herwood takes great care to provide high quality and safe products to its customers. All of the wood used to create our pallets and crates is treated according to the strictest phytosanitary standards. Our products meet the ISPM-15 specifications required for international shipping, which means that the wood is simply not capable of carrying (and therefore transmitting) an invasive species in any stage of development.

If you’ve got concerns about your wooden pallets or packing materials, or if you’re interested in purchasing pallets, let’s talk. With our products, you’ll never have to worry about invasive species getting in the way of your business.